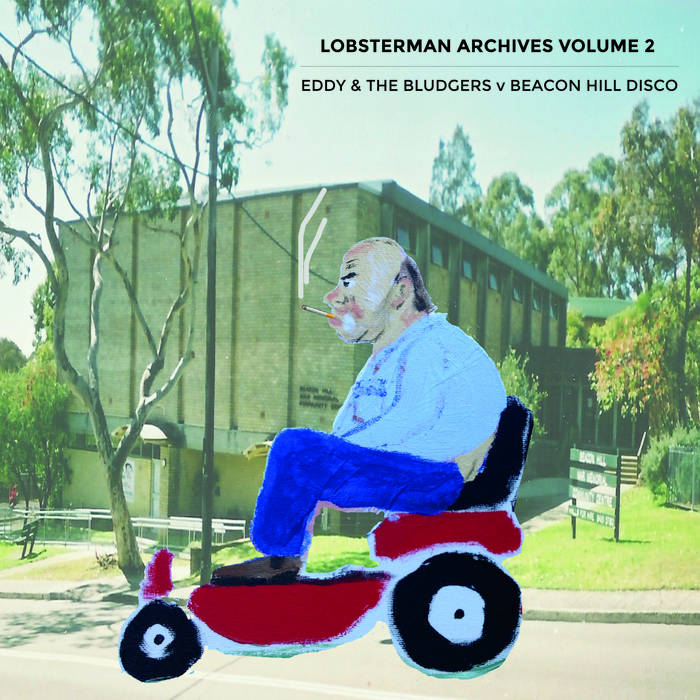 Volume 2 of the Lobsterman Archives, an initiative by China Pig Records to shine light on this most singular of artists with a career spanning 30 years and over 100 self-releases, has arrived. Eddy & The Bludgers v Beacon Hill Disco compiles a side each of tracks from just two undeniably strong albums. The songs were written between 1987-1991 (the Archive series is chronological with respect to date of composition, due to Lobster logic) but recorded at the turn of the century.

This volume finds our hero in a period of transition. Mexicans Trapped In Rubble were playing shows with the likes of Craven Fops and Tactics, and Crow singer Peter Fenton would do their sound on occasion, but they were starting to disintegrate. As historian Quinlan Boyne writes, “1987 and 1988 were known as the ‘Weena Years’, due to the bizarre decision by Lobster to don the blue and white ‘butcher’s apron’ and play some fullback and wing for the struggling Narraweena Hawks”. Before long, “Crocx was MIA, possibly working as a bricky’s labourer, drinking longnecks in Lake Munmorah”.

However, we have the songs of this period, and what songs they are. On the Beacon Hill Disco side, recorded on sumptuous Roland 8-track (unusually clear sound for a Lobster recording), we suffer through a “Hard Allambie Winter” where “everything’s as dry as a Pommy’s towel”; we empathise with a lonely seagull with one foot, begging for a bite of your hamburger; we share the joy of the “unfinishable mixed grill” at Lobster’s favourite truckstop, the “Big T”; we ponder the strange allure of public bar tiles.

Flip it over and the sound is more what we might expect of this prolific home-recorder - let’s call it “thin-timate” (ahem . . .). Lobster’s nervous energy alights on many subjects before darting away, just like the pest in “A Fly Landed On My Lip” (“I can still feel it!”). In “Injuries Rife”, Lobster confesses “I yelled too much on Sunday afternoon at three o’clock, now I can’t talk”. In “Banana Tree”, he injures a cricket while gardening. What to do? Put him out of his misery? However, don’t think that these snapshots of Australian suburban life preclude romance. With great emotional bravery, in a line that will penetrate even the hardest of hearts, in “Concrete Park” the Lobster asks his paramour the eternal question: “Would you like anything else on that bread?”