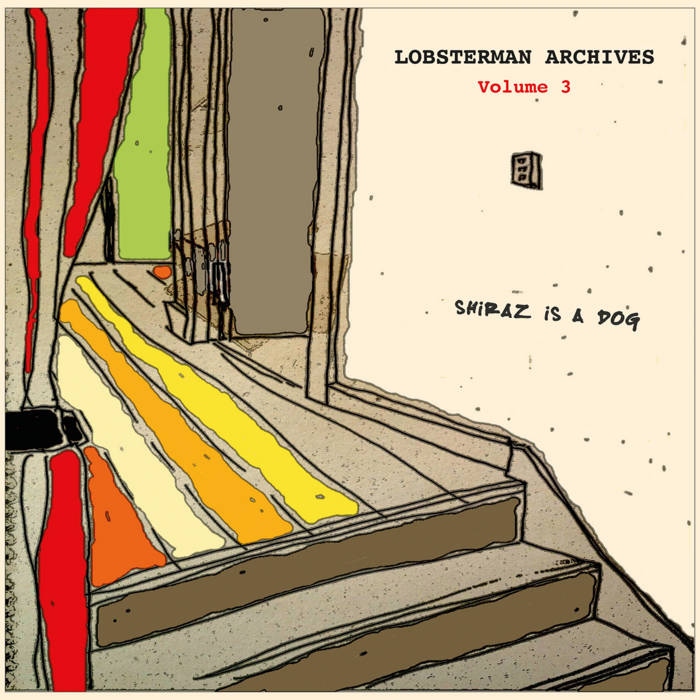 Lobsterman is one of the great cult artists of our time. Labouring away in obscurity in Sydney (northern beaches – inner west – northern beaches) since the mid-1980s, Chris Lobb’s finely crafted vignettes reflect upon life’s seeming insignificant elements, to sometimes humorous, sometimes poignant effect. He commands a devoted following in Sydney and, curiously, Tasmania. While in some ways it’s appropriate to consider him in the context of artists like R. Stevie Moore, Jad Fair and Jandek, his keen ear for melody would place him closer to Daniel Johnston, were he not much more a fan of Captain Beefheart, The Fall and Laughing Clowns.

China Pig Records is collating some of the most intriguing tracks from 100+ releases for the Lobsterman Archives series. Volume 3 brings us up to the year 2000, give or take. Most of the tracks are by his band Unseen, which ran 1993-1997. Here for your delight are four tracks from Unseen’s Russian concept EP The Niggler as well as ruminations on insects, why stuff gets in your eye, strange friends and the pranks you can play on them, and the lack of suitability of the songwriter’s hands for the manual labour of groundskeeping (Lobb’s day job). The music has no trouble veering from taut indie rock to gothic minor key themes that would suit a home-made horror movie.

We at China Pig Records are a bit dumbstruck that an artist this accessible and profoundly Australian remains so obscure. It’s only a matter of time before larger numbers take Lobsterman to their collective bosom.

The third volume of the Lobsterman archives covers most of the 1990s, a period of creativity dominated by the great crustacean’s second major phase – the group Unseen. Whereas the mid-late 1980s group Mexicans Trapped in Rubble (see volumes 1 and 2) were a kind of absurdist punk trio (two guitars and drums, no bass for the most part), Unseen are characterised by Carol Gibson’s violin, a somewhat gothic tone, and Lobster’s shift to nylon string.

But just before Unseen there was a period of woodshedding with bassist Henry Wayne, Wooden Actors. The two tracks from this period had to be recreated recently due to an unfortunate disposal of tapes during a house move (Lobster, you wally!). “Day” and “Eye” are intriguing entries in the Lobsterman canon. Though at first it seems as though the Unseen period lacks something of Lobsterman’s usual light-heartedness and humour, immersion in these tracks shows something pretty interesting going on. Sonically, it’s adventurous work, with the inspired keyboards of Michael “Ag” Christie often to the fore. Gibson’s violin and Melissa Hunt’s (a.k.a. Missy Owly Girl’s) double bass contribute to a chamber folk feel, especially on the tracks from the Russian concept EP The Niggler (6, 7, 10 & 11). The delicate but at times clattering approach of drummer David Lord was another unique part of the Unseen puzzle.

The usual Lobster reference points of Laughing Clowns, Tactics, Pere Ubu, Beefheart and The Fall are somewhat displaced in Unseen and some unlikely resonances can be heard, even if not intended by Lobster. The recurring keyboard and guitar unison melody on “Ribs Lynch” brings to mind Australian one hit wonder Healing Force’s “Golden Miles”; “Cabin Ten” is like the soundtrack to a low budget Spaghetti Western. In fact, Unseen embraced the idea that they were making horror movie soundtracks, and so a sense of menace flows through much of their stuff.

The transition from Unseen to Lobsterman is documented here. The Niggler, in which Lobster indulged, and was indulged, in his passion for Tchaikovsky, Shostakovich, Dostoevsky and Solzhenitsyn (according to his ghostwriter Quinlan Boyne in The Young Fellow’s Encyclopedia – Quinlan Books, 2012) featured both Henry and Missy on basses, after which Henry peeled off to concentrate on his surfboard business. Ag was occasionally on bass in these transitionary times too. Unseen finally folded in late 1997; Lobsterman as a group identity was already active. While Unseen had become a pool of players and possibilities, caught on posthumous clean-up exercises Boiled Legs, Blue Heaven and Burnt Offerings, Lobsterman emerged as the three-piece of Lobb, Missy and drummer Chris Baz, with secret weapons Ag and James D. Woff of Crow sprinkling occasional magic on this back-to-basics scene. Despite Lobsterman’s incorrigible archiving tendencies happening concurrently, tracks 1, 8 & 12, from Get With Lobsterman, represent a fresh start.

While the lean line-up of Lobsterman set the template for much of Lobster’s work over the last two decades, it’s worth noting that the period represented here in Volume 3 – Wooden Actors-Unseen-early Lobsterman – features some of his highest fidelity recordings. This makes them neither better or worse, just a different experience to his usual lo-fi ways. The clarity of the recordings made to tape – from Acoustic Horror and The Niggler (whose respective 30 and 15 minute lengths reflect the reuse of a single reel of multi-track tape) and by Tony Dupe in Gerroa (Get With, Boiled Legs and Burnt Offerings) are a refreshing novelty in the Lobster oeuvre. At the rate we’re going, expect Volume 4, where we get serious about the Lobsterman era, some time in 2020.