Stars Turn Inside Out 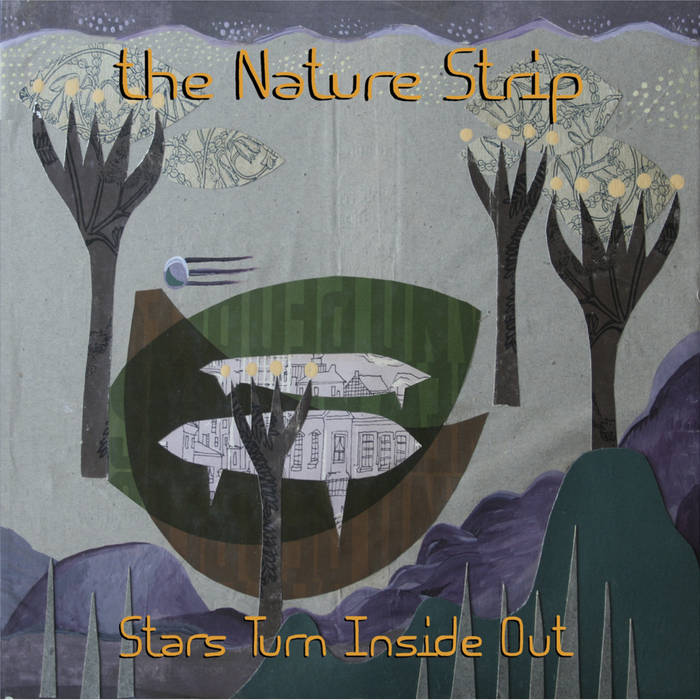 Abduction by aliens. Encounters with clowns and tigers. A game involving sleep deprivation. A library of regret. Einsteinian space/time delusions. The Nature Strip’s tunes are obviously written directly from experience. The whole thing rides - bumpily at times - on a magic carpet of guitars and vocal harmonies, synthesisers (real and virtual) and rhythms pulled from the bowels of old Casios, as well as played by human hands.

The Nature Strip began as the duo of Peter Marley and John Encarnacao, who did three albums as Warmer for W.Minc and Half a Cow (johnencarnacao.bandcamp.com). TNS is a whole new beast though - brighter, poppier, harder, faster . . . Their songwriting intersects in a rambling holiday house in Currarong, three hours south of Sydney on Australia’s east coast. Pete brings science fiction and vocal harmony hooks by the bucketful, John brings the curveballs and adult themes. They share respect for The Well Written Pop Song. Together they produce tracks that raid '70s and '80s power pop and new wave in an almost random fashion to make new pocket masterpieces of the misremembered.

Beautiful Rain
The album’s opener features the first reference to outer space, or aliens, with some guitars that jangle like paisley and others that tower and teeter like skyscrapers. Who knew that the portal to another dimension was a toy piano?

Three-Foot High Sissy Bar
No spaceships here - the mode of transport, and escape, is the humble dragster. The track itself stomps like a pair of Marc Bolan’s platforms, although it might be PJ Harvey wearing them. The drum sound is courtesy of the reverb of a two-story stairwell . . . and a pair of maracas standing in for drum sticks.

Fly Through
This one’s a blinding ray of galloping poptimism, though there is a verse about death . . . Highlights the Marley-E vocal blend. The Everly Brothers they may not be, but they got their own thing.

It’s Inside You
Enter the Portuguese guitar (it sounds a bit like a mandolin, but deeper) . . . and the cello for extra heaviosity. Another dose of killer jangle. The lyrics sound kinda cosmic. Light one up and let us know what you think.

What A Life
It could happen to anyone, seeing your future written in someone else’s face. As poignant as a Colin Moulding song on an old XTC record, this one ambles along on an acoustic-driven groove.

Worst One
This is the song that kicked the record off really, John helping Pete to finish a three-quarter done power pop monster. Some channelling of Big Star and Badfinger going on here.

Hero
Pete melts the stoniest of hearts, smashing through meteors, battling with tigers and giants, diving deep for the prize - all for you. With a half-broken piano and an r’n’b drum loop that rumbles like a dinosaur.

Sugar Crash
Do we have to spell this one out? ‘A man and a woman pick from the apple tree’. Quotes Robert Johnson and sounds a bit like Kiss gone punk.

Beyond The Nether
Outer space? Actually, more like the other side of consciousness, wherever that is. The closest thing to punk here, with a toxic Casio date-stamped 1980 contributing to the claustrophobia.

If You Try
A kindred soul to ‘What A Life’, this one also stares down love with a kiss of life.

Instruments and voices by Peter Marley and John Encarnacao.
Cello on 'Hero' and 'It's Inside You' by Anthea Cottee
Drums on 'What A Life', "Worst One', 'Sugar Crash', 'Beyond The Nether' and 'If You Try' by Jess Ciampa.

Recorded by Peter Marley with John Encarnacao
Basic tracks for 'What A Life', "Worst One', 'Sugar Crash', 'Beyond The Nether' and 'If You Try', and cello parts recorded at Building O by Adrian Barr.
All songs remixed by Michael Carpenter at Love Hz
Mastered by Michael Macken
John Encarnacao is published by Mushroom.